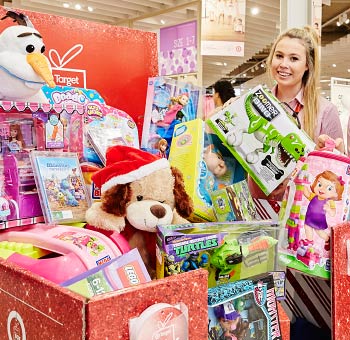 Each Year Target and Uniting Care partner together to help raise money and gifts during the Christmas period for disadvantaged people across Australia. They have collected over 2.1million gifts in the last 25 years, and have raised in excess of $2 million dollars in the last 2 years alone.

For those who headed into a Target store over the Christmas period, you would have noticed a Christmas tree near to the front of the store with gifts under the tree and gift cards attached to the tree. The main aim is to make Christmas more special for the thousands of Australians, who for various reasons are unable to celebrate Christmas.

Recently, on behalf of Bathurst Uniting Church a team of 5 members from our Congregation met, discussed, and distributed the gifts and money to bring hope to many members of our Bathurst Community and beyond. A total of $5500 was received from our local Target Store in the form of gifts and money donations (which was used to purchase gift vouchers). These gifts and vouchers were donated to various charities in Bathurst who help people from all different backgrounds.

Lots of great stories have come out of the 2017 Target Christmas appeal. Connections have been made, and hope has been renewed.
When we were researching which local charities would benefit from the Uniting Care Target Christmas appeal, we decided to contact several local programs, one of which is run at the Bathurst Jail. The Shine for kids program assists children and young people with a relative in the criminal justice system. Upon hearing of their great needs, one of our Church members offered a second hand television to be utilised for this program. We could not use the funds from the Target Christmas appeal, but the team felt it was a worthy cause to support so one of our fellowship groups financed it on behalf of the church.

Overall, the 2017 Uniting Care Target Christmas appeal was a massive success and we thank those who supported it either directly or indirectly.

Your ticket for the: Target Christmas Appeal